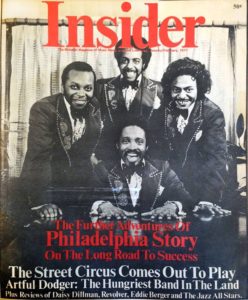 I am a firm believer in the Laws of Attraction. It amazes me how the flimsiest of connections can bring people together from all corners of the earth.
The Philadelphia Story is a quartet. I never met them, and never heard them sing, but there was a connection and although flimsy, it was enough to grant them honorary Dayton Group props.
Forty years ago, I was part of a band called The Stone Soul Image. We were invited by our manager’s old friend Fuller Gordy, to come to Detroit and audition for Motown. Our audition started by an opening act gig at the renowned Motor City club, known as the Twenty Grand. The headliner was David Ruffin, recent departee from the world famous Temptations. In the process of working on our Motown deal, some of the principals were talking about having us tour with David Ruffin, either as his background singers or as his opening act. The negotiations broke down, primarily because we ranged in age from 21 to 15.
It’s all about me right….
To make a long story short, the group Philadelphia Story got the gig. They went out and lended their voices to the success of David Ruffin’s fledgling solo career. 40 years later, on face book I connected with Monroe Wright, one of the singers with the group. Although his political ideas are totally wrong (LOL), our musical experiences have been enough of a bond to keep us laughing.
That was just one connection with me and the Philadelphia Story. After moving to Los Angeles, my former group mate, Reggie Crutcher put together a new group called Arogance. Recruiting a couple of singers to fill out our quartet was not easy. Hundreds of

singers come to LA, seeking their fortune. Most of them can’t sing. One of the few that we encountered was Guy Ellington, a cousin of the Duke. He had travelled to Los Angeles from Chicago, and we played the Los Angeles Street Scene, opening for Three Dog Night, and the Friends of Distinction. We performed in the main room of the Playboy Club with the band Record Player and we were starting to build a following. Guy had been busy prior to joining Arogance, however. Earlier he had been recruited by Monroe Wright to join the Philadelphia Story as a replacement singer. There is the law of attraction. Two connection points between 3 men from 3 different cor

ners of the country, drawn together by a love for music.
I’m still waiting to hear a piece of their music.

This site uses Akismet to reduce spam. Learn how your comment data is processed.